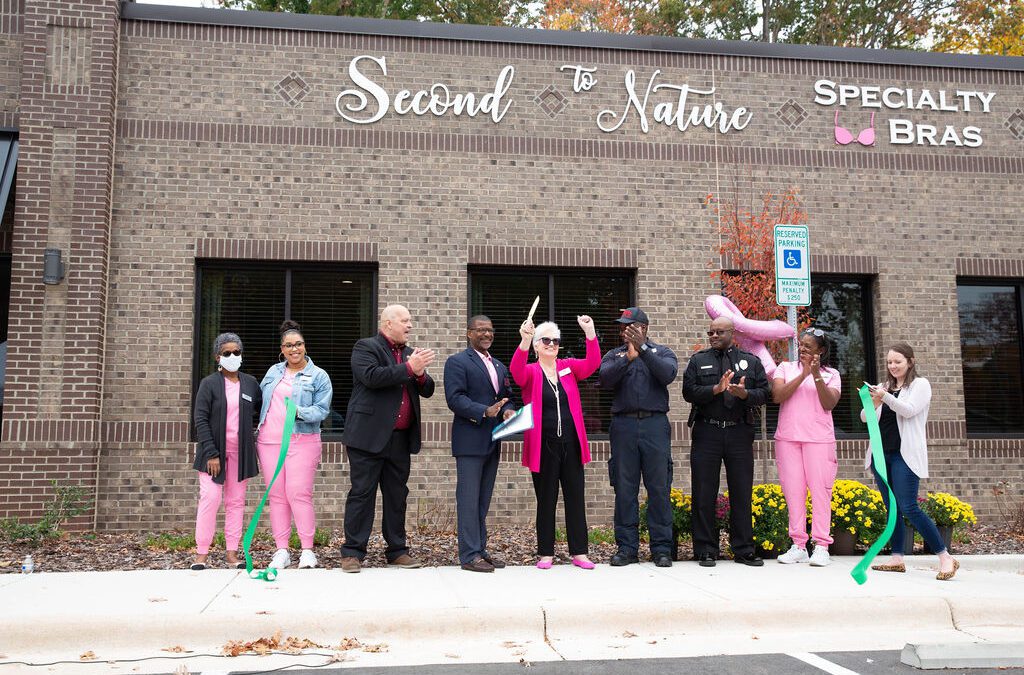 On Thursday October 27, 2022, Second To Nature held its Grand Opening Ribbon Cutting ceremony for the new location at 4123 Lawndale Dr. in Greensboro.  The morning began for us here around 8:00 AM as the final preparations began coming together.  Lisa, Justine, and Jennifer began putting on the finishing touches for the food line back in the breakroom.  Outside, the air was brisk as Mark and Tiara began setting up the tent, sound system and the Kozy Skin Care product area.  The parking direction signs were put in place around 11:00 AM and everything was ready to go.  Next came the arrival of “Debbie, the Pink Firetruck”. Thank you to the High Point Fire Department for having “Debbie” and fireman Jeff here for the celebration.  The program began with introductions and thanks to everyone involved.  Some of our distinguished guests included Deputy Chief of Police from the Greensboro Police Department, Michael Terry along with Greensboro Fireman Jeffrey Owens as well as Greensboro City Councilman Hugh Holston.

Next, we heard a touching speech and testimonial from Carol Earnhardt, a teacher from Glenn High School in Kernersville.  Carol is a breast cancer survivor and longtime patient here at Second To Nature.  She also is actively involved every year in fundraisers at Glenn High School during Breast Cancer Awareness month.  Thank you, Carol, for your kind words.

Following Carol’s speech, we heard from our guest speaker Dr. Margaret Bertrand.  She too is a long time Second To Nature patient and friend.

Next, we heard from Ramona in a speech that really highlighted the importance of Second To Nature’s ability to assist people through their journey and how fulfilling it is to her and all the fitters to create those lifelong friendships and the bonds that are formed throughout their journey.  Her speech culminated with the actual cutting of the ribbon followed by a few words from City Councilman, Hugh Holston.

To round out the event door prizes including free passes to the Greensboro Science Center were given away as well as an auction for gift baskets, including one from our friends at Amoena.

The turnout was great and everyone there was able to see the new building and view some of the inside operations of how business is done.  They even got to meet representatives from our main vendors at ABC, Trulife and Amoena.

We also want to thank our other associates who assisted in the days leading up the event and the day of, Brandon, Cecilia, Tina and Alyssa.  And a special thank you goes out to those who worked behind the scenes to make everything a success, Maria for the photography and to Nathan for the promotion.  This is another stepping stone on the path to another successful year at Second To Nature.  We look forward to continuing serving the community in the years to come.